"After finishing this book all I can say is wow, that ended up being so much more than I expected. I knew it was a short – only 11,500 words – but I’m amazed at just how much Anne Brooke gets across in those 11,500 words. She takes us from two strangers meeting, under false pretenses at that, to two guys making a real connection."

"Taking a Chance was a quick, fun, sexy, surprisingly thoughtful read about a young man who didn't know he had a submissive side he wanted to explore...until he met the man who brought it out in him. I really enjoyed taking that exploratory journey with Benjamin."

Thirdly and lastly it received a few nice comments from Sandra at BookLikes. Many thanks to all readers and reviewers. And don't forget there's a chance (ha! See what I did there, eh ...) of winning a FREE copy at the current BookLikes giveaway which ends on 1 December. Nineteen people have already entered the competition, and I hope I might be able to gain 25 interested people - with a bit of luck and the wind behind me.

"The author has written an excellent book with a lot more to it than most other books. Not a book to forget in a hurry."

Not to be outdone, the Gathandrian gay-themed fantasy series has had a very brief moment of popularity at Amazon UK. The Gifting(Gathandria *1) was No 71 in the Sword and Sorcery charts,Hallsfoot's Battle (Gathandria *2) was No 87, and The Executioner's Cane (Gathandria *3) came in at No 68. And don't forget they're all FREE at Amazon and everywhere else too, so you can't go far wrong if you give them a go.

I've been ill again most of this week with my usual catarrh/bad cold horrors. That's the third bout since September, so maybe it's my new hobby? Or possibly a sure-fire way to keep Mr Lemsip and Mr Lucozade in business. Never say I do nothing for the UK economy, eh ... Anyway, I managed to keep going at work, which was a good thing as there were a shed-load of key meetings I just had to do the minutes for, so that saved a lot of hassle. But once I'd left for the week on Thursday afternoon, it all went to hell in a hand basket, as they say. Hey ho. Suffice it to say there was no visit to the theatre to seeA Midsummer Night's Dream on Thursday, no golf on Friday, and a hell of a lot of snorting, groaning and sleeping for the rest of the weekend. 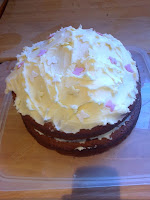 I did manage to rally for long enough to bake Brazilian Stout Cake on Saturday morning though, which is proving very tasty - though certainly not the easiest cake in the world to make. If I feel strong enough ever, I might make it again at some point.