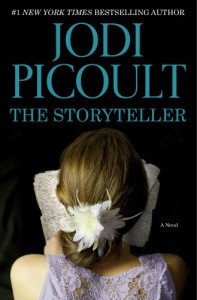 This seems something of a departure for Picoult - focusing as it does on the horrors of war and how terrible experiences affect the families of those who come after. Sage Singer is a very strong character and beautifully placed as a vulnerable baker within her community. I enjoyed her story very much and would have preferred to have spent more time with her. However the bulk of the central sections focus on Sage's grandmother's experiences of war and her time in Auschwitz and how she survived. It's both horrific and absolutely perfectly written.

So in some ways it was a shock to be delivered back to Sage's story at the end - though it also makes sense as Sage is searching for clues about her grandmother's past, and for good reason. There is however a decision Sage makes at the very end which I felt was totally out of character for the woman I'd come to know - and which left me feeling very dissatisfied indeed. Without spoiling the plot of a book I can otherwise recommend, I'd say it would have been far more powerful and emotionally accurate if Sage's decision had actually been the opposite one, and this would also have more hopeful in terms of her developing relationship with the Nazi hunter. Still, it's a powerful read nonetheless.