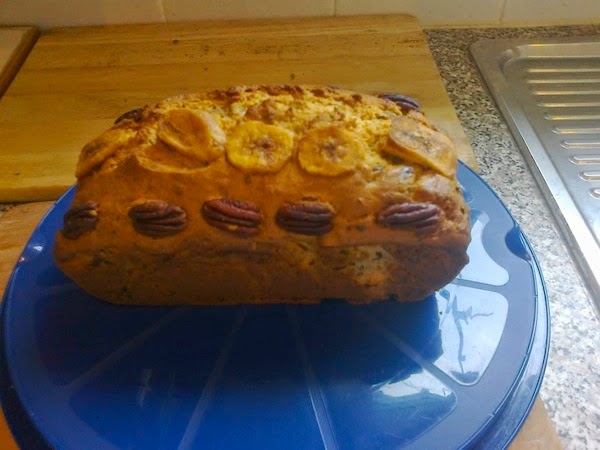 Today's cake is banana, date & pecan loaf. Well, that's not quite true. It was supposed to be banana, date and walnut loaf, but there is in the pantry a sad lack of walnuts - so pecans will have to do. I don't suppose it will matter much.

It's a fairly easy recipe, but you might like to check your citrus fruit before you squeeze it (as it were). I merrily grabbed the first likely looking fruit from the bowl and was equally merrily squeezing away when it dawned on me that for lemon juice it was pretty orange and indeed smelt more like an orange than I'd expected from a lemon.

Which was entirely reasonable as the pesky thing was an orange, after all. Hey ho. Back to the fruit bowl in search of the secretive lemon, which was cunningly hiding under one of the bananas. Or trying to be a banana in the attempt to survive a little longer - not a good plan in a banana-based recipe, but I don't expect lemons can read.

Anyway, all smooth-running from there on it - though be warned it does take a good hour and a quarter in the oven. And if I'd known the middle would rise quite so much, I would have put the line of pecans closer to the centre. Still, it's all in the taste, as far as I'm concerned - and it certainly smells amazing.