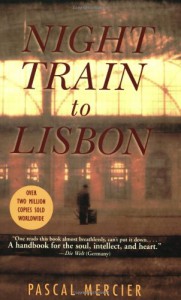 A turgid book, which has a few moments of interest at the beginning, when teacher Gregorius decides to change his life so radically that he abandons his classroom in mid-lesson. It’s certainly an exciting start (in a literary genre understanding of the concept of ‘excitement’, that is) though I thought the scene of a strange woman writing a phone number on Gregorius' head was beyond curious. At that stage, however, I was prepared to forgive this small oddity in the hope that the book’s interest would grow and deepen.

It didn’t. There’s a fair amount of travel in various directions, as the MC chases after the elusive (and now dead) author Prado. He meets a lot of people who make a large number of not-very-interesting and very long-winded declarations. Goodness, they do go on. The characterisation and plot gets entirely lost under a veritable barrage of words, and I abandoned all interest in the novel at a fairly early stage. Sometimes the prose is laughably bad, and there’s far too much telling and not nearly enough showing us what’s going on. Not a good combination.

I think it might have had a slight chance if the mysterious Prado had been a writer worth pursuing, but honestly he wasn’t. I grew very tired of his interminable book and his dull ramblings but the good news is they’re easy to skip as they’re in italics. Suffice it to say there’s a love triangle of some sort or other, but I couldn’t be bothered to understand much of the details. I also have no idea why all the women appear to be in love with Prado, as he strikes me as nothing more or less than a smug and pretentious egotist too wrapped up in his own perceived perfection to have any real time for anyone else.

Perhaps though, at some level, that’s the point of all this? That we all tend to pursue goals and dreams which aren’t what they appear to be, and really Gregorius would have been far better off giving the night train to Lisbon a miss, and finishing off the lesson he left so abruptly instead. The Isabel Allende quote on the front tells us she thinks it’s one of the best book she’s ever read. My suggestion would be that she widens her reading material, hey ho. Oh well.